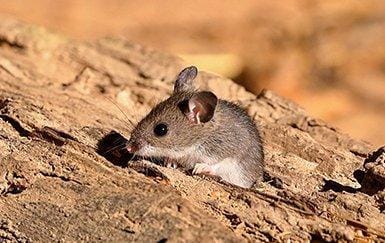 What’s The Difference Between Deer Mice And House Mice?

Deer mice are the larger of the two mice at roughly seven inches in length, including their tail. Fur colors vary between light brown, red, or grey, and their underside is usually white. Pointed noses, large ears, and small tails are their distinct identifying features.

House mice tend to grow no larger than about five inches overall. Their fur tends to be light brown, but it can be grey. These mice have small ears, bellies with light-colored fur, and large feet. They are smaller than deer mice but may have a longer tail than their counterparts.

Both deer mice and house mice can live inside homes, but house mice – as their name suggests – tend to move indoors more often than deer mice. Typically, house mice will nest inside your home in wall voids or secluded and undisturbed areas, like behind appliances, in attics, or basements.

Deer mice, on the other hand, tend to live outdoors, usually in or around logs. You’ll often find them in garages, sheds, and other outdoor storage areas. Deer mice will still sometimes move into a house, however. They’ll usually come in when they need a heat source or access to food – lower temperatures tend to create a scarcity of both.

Regardless of temperatures and outdoor preferences, both types of mice will usually come inside if there’s a food source they can frequently access. Mice will eat just about anything, so even a few crumbs could attract them into your home. Once they get inside, they set up their nests and begin breeding, creating an infestation rapidly.

Are Deer Mice And House Mice Dangerous To Homeowners?

Both deer mice and house mice are incredibly dangerous. Although the former rarely bites, both can, and their bits spread dangerous diseases. The most notable is hantavirus, but they can also spread salmonella, rat-bite fever, and listeria. Mice also transmit these diseases through their urine and droppings. Fleas and mites may also accompany a mouse infestation.

Aside from the diseases they spread, mice can contaminate your food, start electrical fires, clog pipes with their nests, and chew on everything. They will cause massive destruction if they run rampant, and you’ll struggle to get rid of them as they rapidly breed.

To keep mice from taking over your home, call Innovative Pest Control for a free inspection. We offer year-round pest control with quarterly inspections that keep mice and other pests out of your home permanently. Mice are incredibly dangerous, and you shouldn’t try to deal with them yourself. The trained professionals at Innovative Pest Control can help locate mice and their nests in your home and eradicate any ongoing infestations while preventing further ones. Call Innovative to innovate your home’s pest control.