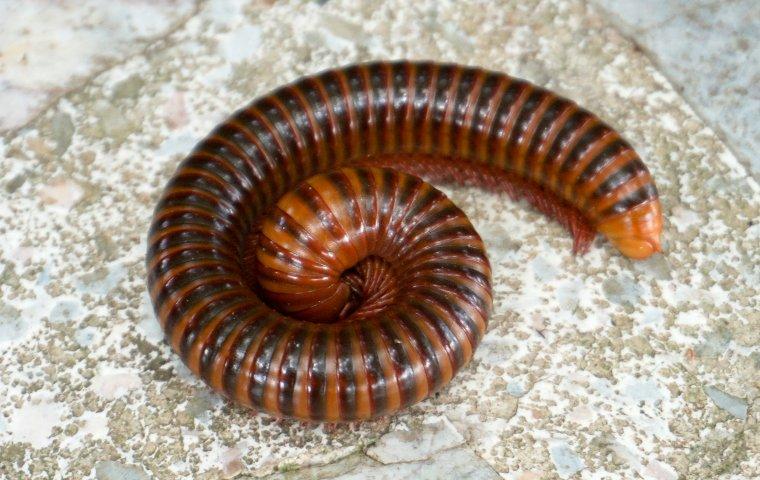 What Everyone Ought To Know About Millipedes

Millipedes are hardly harmful, in fact, they’re downright docile compared to other insects — more likely to curl up into a ball and hide than to attack. But just like any other creepy-crawly bug in your home, just because they aren’t especially dangerous doesn’t mean you want them infesting your basement. If you’ve been wondering about those many-legged pests you’ve seen around lately, here’s what you need to know about millipedes.

Thousands of species of millipedes have been discovered all over the world. While they share many similar attributes, no millipede actually has a thousand legs (although it might look like it). Millipedes are slender, long-bodied arthropods with either a few dozen or a few hundred legs. They are typically brown in color and are often said to resemble walking worms. Depending on the species, adult millipedes can range in size from 1/2 inch to 1 ½ inches in length, though in tropical locations, some specimens can exceed 10 inches. Millipede bodies are divided into segments, each with its own respective pair of legs.

Millipedes aren’t known to bite, spread disease, or cause significant destruction. Generally, these extra-long bugs are considered more of a nuisance than an actual danger to your property and family. However, millipedes can be harmful if handled.

When threatened, some millipedes will secrete a defensive fluid that contains hydrochloric acid. When handled, this fluid will burn and discolor the skin and poses a danger of damaging the eyes. Millipedes are also known to produce an odor that can linger on the skin long after contact. But these are defense mechanisms that millipedes use to protect themselves from predators, and millipedes won’t deliberately attack.

So, you probably shouldn’t try to pick up a millipede if you spot one, at least not with your bare hands. If, for some reason, you do feel the need to handle these many-legged bugs, wear gloves.

Why Do I Have Millipedes?

Millipedes prefer to live outdoors in damp, decaying environments. Millipedes are renowned for their recycling abilities, breaking down the organic materials in leaf piles, compost, and mulch and converting the nutrients back into the soil. Millipedes gravitate towards these types of environments, so unless your home is full of damp, decaying plants, you’re not likely to develop a millipede infestation. However, sometimes climate and weather circumstances will force millipedes indoors.

Following periods of heavy rain or prolonged drought, millipedes are likely to find their way inside. Finding their way in through basement windows, ventilation, and weather stripping, they typically inhabit humid areas like basements and crawl spaces. Millipedes will frequently seek shelter under storage boxes or furniture, often startling homeowners when they move things around. Although relatively harmless, millipedes can be upsetting to see, especially because they tend to move in large numbers.

Fortunately for you (and unfortunately for millipedes) infestations of millipedes don’t usually last very long. Millipedes require particularly high moisture levels to survive and will usually die off within a few days’ time.

You don’t want to deal with millipedes in your home. That’s why you can trust the professionals at Innovative Pest Control to handle it. Since 1992, we’ve been providing our award-winning services to our neighbors in the area. With a variety of affordable residential pest control plans and commercial pest control plans available, we can eliminate millipedes and the many problematic pests that plague your home or business. Our services come guaranteed, and if pests return in between visits, we’ll treat the problem free of charge. Get in touch with us today for your free inspection.